Blue Agave is a desert succulent, not a cactus as some have been led to believe. It is a species native to Mexico. There are many kinds of agave throughout Mexico; however the Blue Agave flourishes in volcanic soil in Guadalajara. Although Tequila and Mezcal and its other variants are made all over Mexico and throughout the world, the mountainous state of Jalisco, Mexico is its birthplace. The primary reason for this is that soil in that region comes from the old volcanoes that make up the mountain range. If you ever get an opportunity to visit take special notice at the soil. It shimmers like glitter from all of the nutrients. The Blue Agaves are more hearty and plentiful here than anywhere else in the world.

Incidentally there’s a town in Jalisco near the city of Guadalajara called Tequila. Hummm? The name agave comes from is the Greek word for 'noble.' Agave nectar (and tequila) is made from the sap from hearts (piñas) of the plant. This plant is actually related to the lily and amaryllis (it has its own genus, Agave). It is known as a succulent and, although it shares a common habitat with many cacti, it is not one itself and has a different life cycle. A mature agave has leaves 5-8 feet tall, and is 7-12 feet in diameter. It has a lifespan of 8-15 years, depending on species, growing conditions and climate. 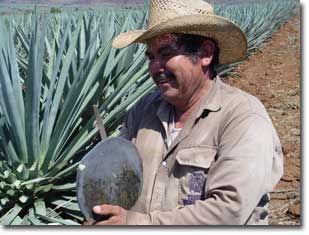 As you can see by the photos on this page the process for extracting the agave is fairly simple. The leaves are removed from the plant which bares the base of the plant 1/2 above and 1/2 below the ground. The agave base is then removed and taken to a facility to where it is heated to no more than 118 degrees F in a giant "pressure cooker" of sorts to get the juices flowing. The base or ball of the plant is then chopped up, filtered, sent through a centrifuge and poured into the bottles you get today. There are other less expensive ways to produce the agave in a faster way, but Volcanic Nectar prefers the more traditional methods for health reasons.

There are many species of agave in Mexico, of which the blue agave - Agave tequilana weber azul - is the only one allowed for use in tequila production and also the only agave used to make our Volcanic Agave Nectar. Blue agave is considered to be the finest agave in the world.

The agaves reproduce both sexually and asexually naturally but those involved in alcohol production are never allowed to reach sexual maturity. At the onset of sexual maturity the agave produces a flowering spike in the middle of the agave. But the agave farmers sever this spike, and all the plants nutrients and energy that would have gone in to making flowers and seeds is then redirected. This redirection is back into the heart of the plant. The severed spike or central stem begins to swell. 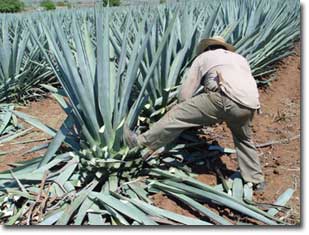 The agaves are cut free from their root base and the sword like leaves are removed from the central stem. It is at this point that the agaves take on a new descriptive name of piña (because they look like big pineapples).

The agave nectar is then heated (less than 118 degrees), causing thermal hydrolysis which breaks down the carbohydrates into sugars. The main carbohydrate is a complex form of fructose called inulin or fructosan. The filtered juice is concentrated to a syrup-like liquid a little thinner than honey 76 Brix. 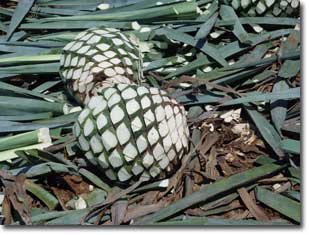 Fructose is a simple sugar found mainly in fruits and vegetables. Due to the predominance of fructose 50% in our agave nectar, our organic agave nectar is much sweeter than sucrose. Thus, a smaller amount yields the same sweetness but fewer calories than sucrose. This gives agave nectar advantages in both the food industry and the health of the consumer.

Agave is naturally fortified with Inulin. Inulins are a group of naturally occurring oligosaccharides (several simple sugars linked together) produced by many types of plants. They belong to a class of carbohydrates known as fructans. Inulin is used by some plants as a means of storing energy and is typically found in roots or rhizomes. Most plants which synthesize and store inulin do not store other materials such as starch.

Inulin is used increasingly in foods, because it has excellent nutritional and functional characteristics. This is particularly advantageous because inulin contains one-third to one-fourth the food energy of sugar or other carbohydrates and one-sixth to one-ninth the food energy of fat. It also increases calcium absorption and possibly magnesium absorption, while promoting probiotic bacteria. Nutritionally, it is considered a form of soluble fiber. Inulin has a minimal impact on blood sugar, making it generally considered suitable for diabetics and potentially helpful in managing blood sugar-related illnesses.

Have more questions? Click here to let us know...

Don't forget to try our other products too!